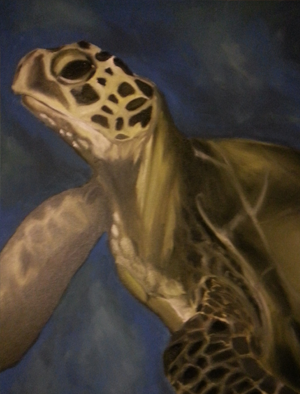 Though junior year of High School had afforded an opportunity to have work displayed in Washington D.C. my journey as an artist did not formally begin until adulthood when working with oils.
The attraction to oils began with an interest in Renaissance and Baroque style paintings where the human form was so wonderfully captured and the contrast between shadow and light breathed life into its figures. These tremendous works of art were worthy of emulation, however, the skill necessary to achieve such alluring depictions had not yet been obtained.

Study of the medium led to haphazard attempts at rendering varying subjects, though nothing of note was ever produced. Many brushes were ruined, and clothing stained after exhaustive practice led to the neglect of the rigorous cleanup necessary with oils. Hour long sessions allowed a familiarity with how the paint blended and molded to form a finished product. Unlike its cousins, oils remained tangible longer, which allowed for smoother transitions between colors and any mistakes to be corrected with ease.

The “Gorilla” was one of the first attempts at portraying animals. Drawn towards the distinction between bright and dark, a black background was chosen with white highlights and subtle tones of brown. In time, a small series grew and through the help of another the first of them sold, which gave confidence in the prospect of turning art from hobby to something more.